My Mom asked me, “If I was becoming Southern?” when I told her I made collard greens.

There are many foods, which come to mind when someone says Southern cooking and collard greens is at the top of my list… Other than fried green tomatoes, okra, and sweet tea.

Collard greens are a staple in eastern North Carolina. People grow them. Pick-ups parked along the road sell them. Restaurants serve them. Every grocery store stocks them year round. They are cheap, abundant, and easy to prepare.

After two years of living in the South, I finally made collard greens. I purchased a shopping bag full at my local farmer’s market.

Collards in general are a healthy leafy veg; however, the traditional preparation is less than so… Pork, lard, etc. While that tastes really yummy, it isn’t exactly good for our health or waistlines.

I made my collards with turkey bacon, sliced garlic, chicken broth.

I cut out the stems then cut the collards into smallish pieces. Then I sautéed the sliced turkey bacon and garlic in olive oil until cooked. I added the collards sautéing for a couple of minutes. I added enough chicken broth to cover the mixture simmering over low heat for an afternoon allowing the collards to becoming tender. When serving, finish it with apple cider vinegar and a dash of red pepper flakes. Yum.

I served it with grilled pork chop and rice. 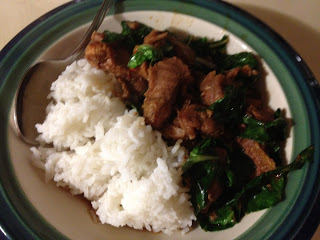 Food Snobs can use Slow Cookers.

Foodie can use slow cookers

Up until a couple of years ago, my nose up to a slow cooker. I didn’t grown up with slow cookers in the kitchen. (They are very American and my Mom wasn’t American.) I had some misconceptions about slow cookers that they were just for football parties or just for chili or cheese dip. An the food produced was slop, unattractive to the eye. I admit I can be a food snob.

That changed when I came across some slow cooker recipes in Real Simple magazine. They looked good. And seemed easy. I didn’t even own a slow cooker. Thanks to a friend who had an extra one she didn’t have a use for, I got started.
I’m glad I gave the humble slow cooker a chance and overcame my prejudice. I’m hooked now. It is a time saver allowing me to throw everything into the slow cooker and just go. Due to where we live, we spent a lot of time on the road and add me traveling for work, the slow cooker has been very helpful in providing a good, solid meal instead of fast foodish options for dinner.During the winter I try to use my slow cooker at least once a month.  I’ll be honest I’m lazy when it comes to slow cooker recipes. All of the recipes I use are chop and dump. I like that I can get the meat already cubed. I don’t braise or soften anything. The only other step is if I need to add veg near the end of cooking or prepare rice/noodles separately. If I wanted to do that I’d just “cook.” Is that the point of slow cooking? One of my favorites, Sweet and Spicy Asian Pork Shoulder with rice. I’m off to the grocery store to buy ingredients for Creamy Chicken and Mushroom Potpie for Saturday’s dinner.

So break out that slow cooker you got for your wedding … yes that one that’s still in the box in your basement… And try something other than chili.

And by the way, I’m always looking for new slow cooker recipes that fit with the lazy slow cooker mentality.