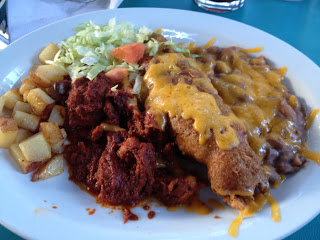 My Mom asked me, “If I was becoming Southern?” when I told her I made collard greens.

There are many foods, which come to mind when someone says Southern cooking and collard greens is at the top of my list… Other than fried green tomatoes, okra, and sweet tea.

Collard greens are a staple in eastern North Carolina. People grow them. Pick-ups parked along the road sell them. Restaurants serve them. Every grocery store stocks them year round. They are cheap, abundant, and easy to prepare.

After two years of living in the South, I finally made collard greens. I purchased a shopping bag full at my local farmer’s market.

Collards in general are a healthy leafy veg; however, the traditional preparation is less than so… Pork, lard, etc. While that tastes really yummy, it isn’t exactly good for our health or waistlines.

I made my collards with turkey bacon, sliced garlic, chicken broth.

I cut out the stems then cut the collards into smallish pieces. Then I sautéed the sliced turkey bacon and garlic in olive oil until cooked. I added the collards sautéing for a couple of minutes. I added enough chicken broth to cover the mixture simmering over low heat for an afternoon allowing the collards to becoming tender. When serving, finish it with apple cider vinegar and a dash of red pepper flakes. Yum.

I served it with grilled pork chop and rice.

Can you ever have enough salsa?

Why, no, no, you can’t ever have enough salsa. Well, ok, maybe if it isn’t fresh homemade salsa and comes out of the jar.

Warm weather begs for salsa to me. I love the brightness of salsa. The texture of salsa. The smell of salsa. I can make a meal out of fresh salsa and chips.

I’ve been using this recipe from Real Simple magazine for years.

The 2.5 cups get eaten pretty quickly so double the recipe or there will be sad faces.

Everyone in our house loves the salsa.

Hanging my head in shame. I admit since we left Lexington, KY two years ago, I haven’t visited a local farmer’s market, but that changed today. Now that I live in downtown Tarboro, I have no excuse not to visit the market on a Saturday morning. It is a 15 minute walk from my new house. And a pretty walk at that… Tree lined sidewalks pass grand old houses. As I walked I wondered what goodies I might find.

The Tarboro Farmer’s Market is very small. There are great efforts to expand it. This community needs a farmer’s market where small family farms can sell and share the bounty of their labors as well as their pride in what they do. And where the community can go get fresh, quality produce at reasonable prices.

Today, there were two booths: a veg farmer and a pie maker. The farmer had wonderfully fresh veg on offer. All picked very early this morning. And the mini pies the baker had were still warm from the oven. Both were proud of their offerings and shared advice on how to prepare the veg. You rarely get this passion at a big box grocery store. Nor the freshness.

My taking from the farmer’s market. I can’t wait to prepare and eat all of this! Especially the pies!

So go out to your local farmer’s market. Discover what wonderful food is produced locally!

White Bread was made for… Chocolate!

Yes, that’s right. I just wrote white bread was made for chocolate. And for breakfast no least. It is. Really. I wouldn’t lie here. Especially about chocolate.

I was first introduced to chocolate on bread from my college roommate, Leive, from Belgium. I was repulsed at first; however, once you try it, you will be hooked.

While you could put your chocolate on wheat or brown bread, it doesn’t quite work in my opinion. It is something about white bread. It compliments the chocolate.

You can put on your bread Nutella (chocolate hazelnut) spread, “Vlokken” (flakes) or “Hagel”(sprinkles). Various options such as pure, milk, or white chocolate. I like them all.

So this morning I felt like white bread and “Vlokken.” And it was so very satisfying! Yum!