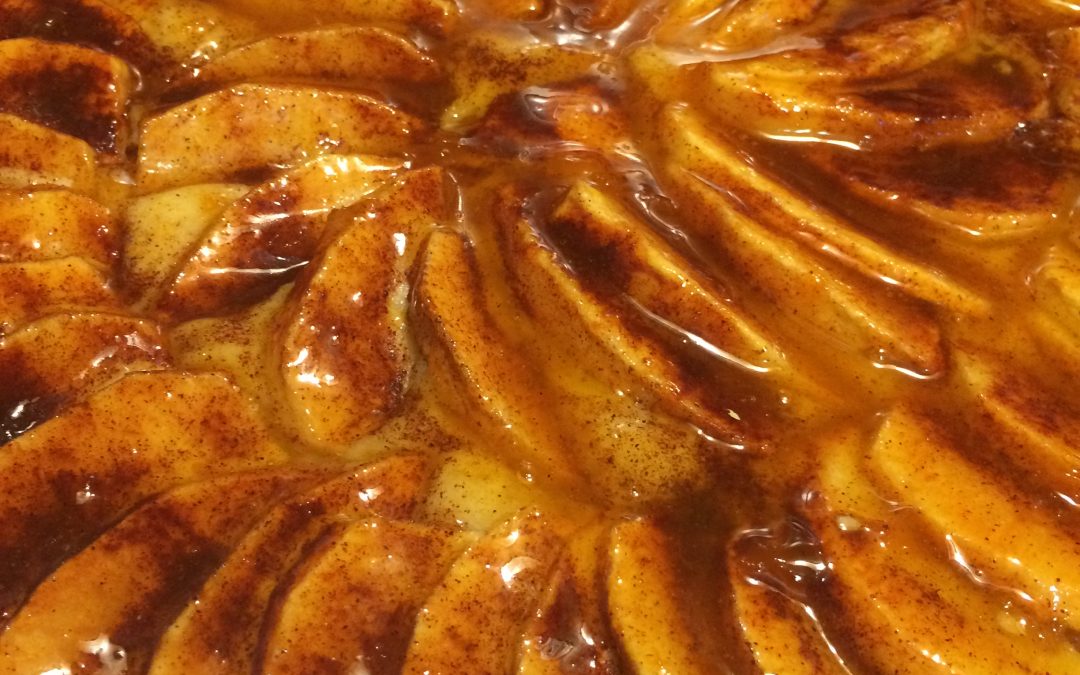 OK, maybe not. I am better sure some pastry shops in Europe can make a tasty apple tart. In my house, we tend to think this apple tart recipe is the best in the world and could stand proudly next to any fancy pastry shop’s offering.

All pastries do not have to be hard. Like this recipe, it is easy to make, but looks amazing. It is not difficult to make. Simple ingredients make for a great tart. Apples are the key ingredient. I use whatever apples I have in my fruit bowl and that is usually Gala. You could use Granny Smith or a combination of apples. My goal is to keep things simple and not sweat about ingredients. If you do not have apples, but peaches or pears then use them. It is all good. The simple pressed dough of butter, sugar, egg, baking powder, and flour accepts whatever you arrange on the top of it. The apricot jam glaze brings it all together and gives it a nice finished shine. You must serve this with freshly made whipped cream. Nothing out of a can or tub will do. It has to be the real deal. Whipped is easy to do. Heavy cream and sugar. That’s it. Whip it until firm. Once you have it then you will always make the good stuff again. 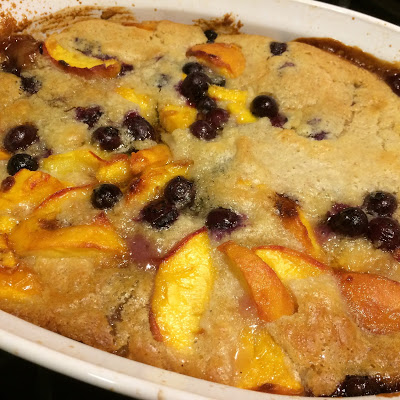 Making a simple and quick cobbler

I can not believe I am writing this, but with all the baking I have done I have never made a cobbler. Yes, that is right. While I have eaten a few of them, I have never made one. A dear friend dropped off a good sized bag of fresh North Carolina peaches. There was too many to eat in one go. They were really ripe and I would hate to have them end up in the compose bin. Also, I had some blueberries needing to be eaten.

Make peach pie or peach cobbler? I chose to make peach cobbler. Honestly, it was late in the day when I made the decision to make something with the peaches. I did not want to go out to the grocery store, so I figured the old stand-by of Bisquick could help me out.  Off to the Googles I went and found a recipe for peach cobbler using Bisquick.

The recipe was easy as pie or in this case cobbler. Only six ingredients: Bisquick, milk, nutmeg, sugar, butter, and peaches. That’s it. Ingredients right out of the pantry. In a little over an hour, we had a yummy peach blueberry cobbler. Combine Bisquick, milk, and nutmeg in an un-greased deep square dish. Stir in butter until mixed. Stir together sugar and fruit then spoon over batter. Bake 50-60 minutes or until golden and bubbly. Top with fresh whipped cream or ice cream. And enjoy! 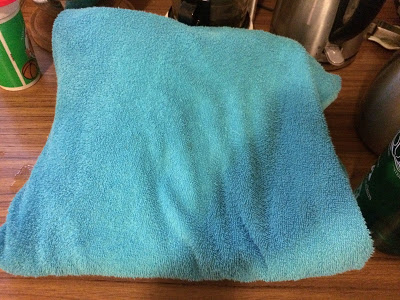 In this ordinary towel is ice cream.

Yes, I just wrote ice cream. If I didn’t just make ice cream I wouldn’t believe it either.
My son saw something on PBS Kids over the weekend. He is now obsessed with making ice cream. I didn’t really want to go out and purchase either an attachment for the KitchenAid or an ice cream maker. While I love my kitchen gadgets, I honestly didn’t want to add another thing to my kitchen. I’ve got plenty of stuff.
So off to the Googles I went. I found a video showing kids how to make ice cream in a bag. I wasn’t convinced yummy ice cream could have come from three 1-gallon bags and a towel.
Recipe had six ingredients: milk, heavy cream, vanilla, sugar, salt, and ice. All ingredients children and adults alike can pronounce. Serves four with sensible serving sizes.
1 cup milk
1 cup heavy cream
1/2 cup sugar
1/2 teaspoon vanilla
1 cup salt divided into two 1/2 cups
10 cups ice divided into five 1 cups
Combine first four ingredients and a dash of salt into a 1-gallon ZipLock bag. Make sure the air is out of the bag, seal it, then mix well. Fill up two Zip Lock bags each with five cups of ice and 1/2 cup of salt. Seal and mix well.
Place one ice bag on a towel. Add the milk bag then the second ice bag. Wrap the towel up. Let sit for 30-minutes.Bunch up the bag like an icing bag and snip a corner off. Fill bowls. It was REALLY yummy!
You can’t get fresher ice cream. And in thirty minutes! And a fun activity to do with your kids.
I know my guy loved it! 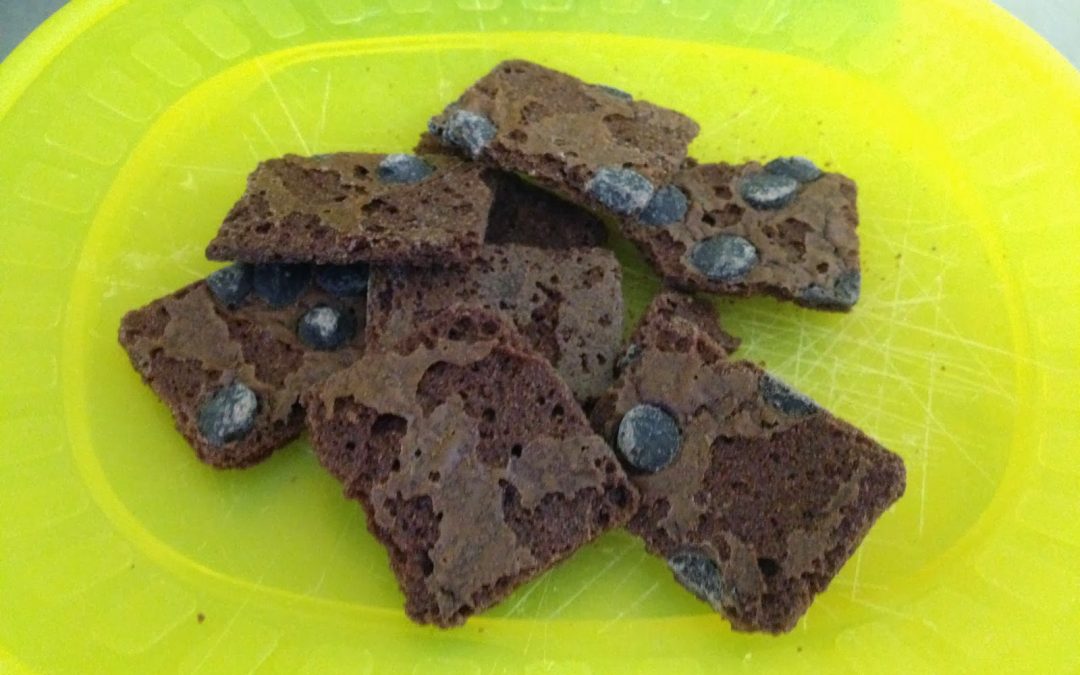 I had the opportunity to taste test Sheila G’s Brownie Brittle due to the platform, Klout. Guess I have “klout” when it comes to food. Anyway my box came in the mail from Klout with my free sample bag of brownie brittle.

I do like my brownies. I am working losing some weight. And my love of brownies and losing weight doesn’t go hand and hand. So I was interested to see how brownie brittle would taste.

The bag I received a 2oz bag of brownie brittle, which has two servings. Each serving is 120 calories with 4 grams of fat and 21 grams of carbs.

Does brown brittle calm a sweet craving? For me yes. After a couple of pieces I was satisfied. It was crunchy and had just a right amount of sweetness.

It is a good sweet snack to have around. Saves your waistline while fulfilling a sweet craving.

Making of the Macaroons When I worked for Girl Scouts in Delaware, I always looked forward to the macaroons served at the end of every event at the Hotel DuPont. They are made with almond paster, sugar, and egg whites. They are divine. And a Wilmington tradition. At Thanksgiving I made a coconut custard pie and had a lot of shredded coconut left over. On the back of the package, there was a recipe for coconut macaroons. I thought I’d try it for our annual Christmas Parade Porch Party to go with my hot chocolate bar.

It was my first time making macaroons and I was a bit unsure. They turned out very nice and easy to make:
2 egg whites
2/3 cup of sugar
1/2 tsp. vanilla extract
pinch of salt
1/2 bag of coconut flakes Beat egg whites until they are fluffy. Slowly add sugar as you continue to beat the egg whites then add the vanilla and pinch of salt. Once soft peaks have formed then fold in the coconut. Mix the ingredients. You could melt chocolate and dip the baked macaroons for some added.

Were they are good as the Hotel DuPont’s? Nope. Not even close. Maybe with practice and their recipe.