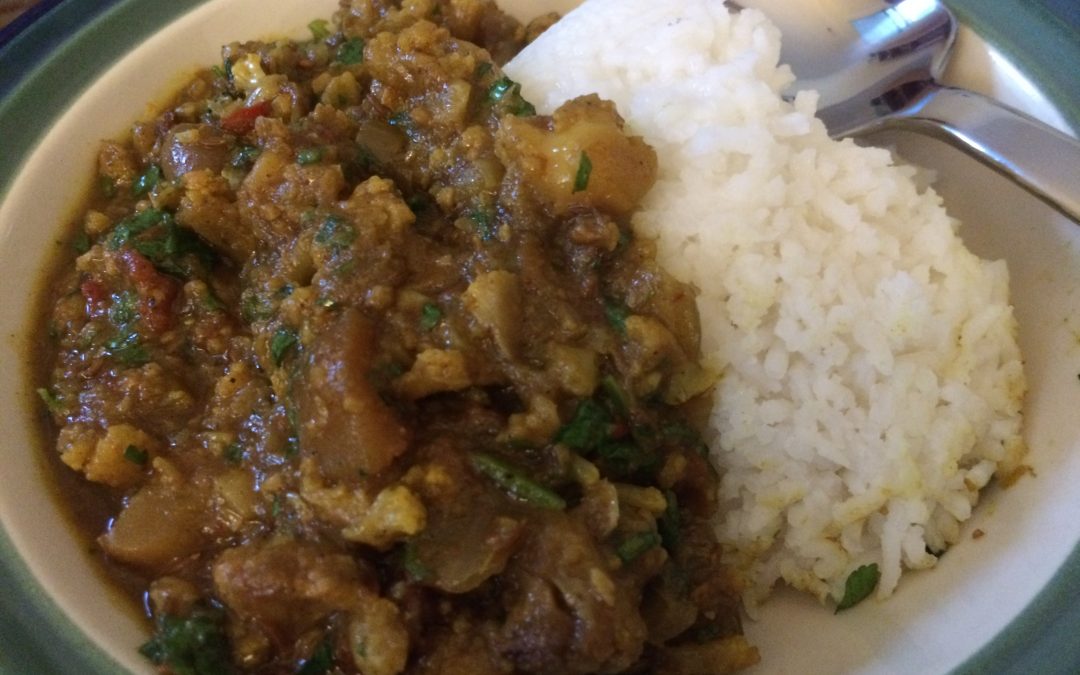 When someone mentions a slow cooker, the first thing for many that comes to mind is a meat and bean chili. Or maybe a pulled pork.  That was me until a couple of years ago. I always thought of chili or some sort of pulled meat in a sweet sauce. I never would have thought of a slow cooker aloo gobi or any other vegetarian meal.

Turns out the slow cooker is ideal for vegetarian meals. You can make tasty, healthy meals from a slow cooker.

I used that Faberware Slow Cooker until it went kaput this week as I was walking out the door. Lucky I checked it before I left or we would have had a disappointing dinner.

I quickly ran to the local Walmart to purchase a slow cooker not wanting to waste my ingredients I had just chopped. Especially that onion that caused me to tear up like a Folgers commercial. Who knew there were so many types of slow cookers? Well I now do.  I like to keep things simple. My idea is less can go wrong. I settled on a Hamilton Beach Programmable 5-quart Slow Cooker. (Affiliate link to Amazon.) This curry is one of my favorite Indian dishes. It is so good and so simple. Cauliflower, potatoes, and tomatoes are the stars of the dish. It is a flavorful curry with wonderful spices of ginger, garlic, jalapeño, cumin seeds, turmeric, and garam masala. More and more ingredients such as cumin seeds and garam masala are becoming easier to find at chain grocery stores allowing this dish is becoming more accessible. Chop vegetables, measure spices, dump, and stir in the slow cooker. You can prep the veggies the night before then dump into the slow cooker in the morning. I use canned tomatoes, baby yellow potatoes, bottled minced garlic, and squeezable ginger to make it easier on me. I recommend this short cuts. If you are looking for slow cooker recipes with meat, click here for some favorites of mine.