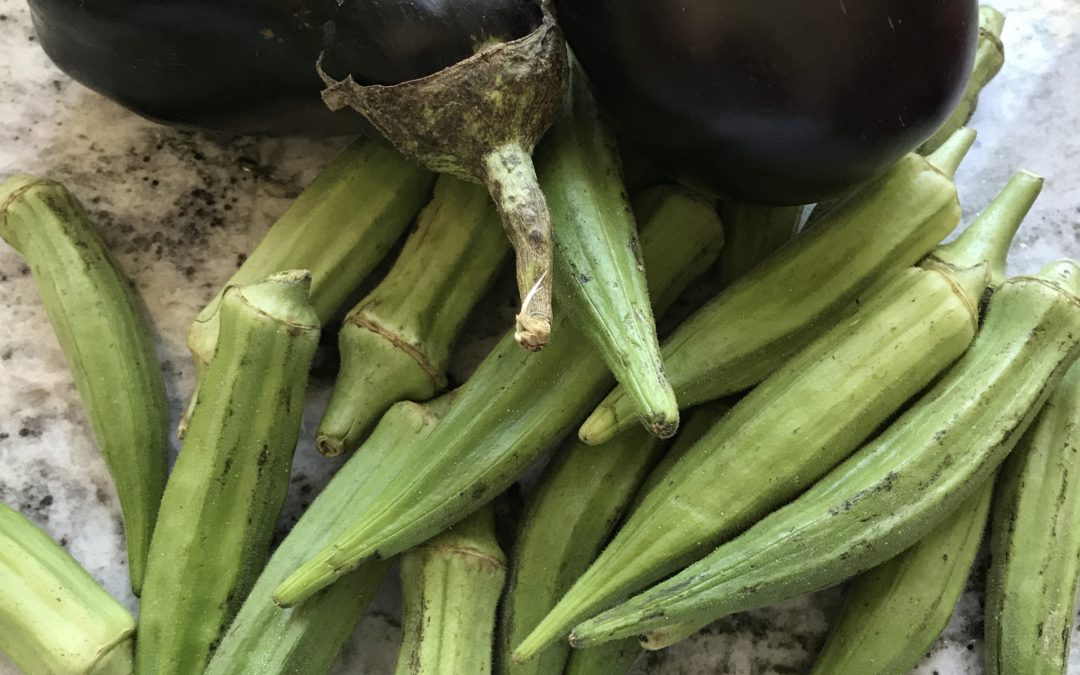 During the summer, local fresh produce is abundant like eggplants and okra. Perfect for this simple eggplant okra curry dish that’s vegetarian. As I am traveling up the East Coast of the US on my way to our new home in Newport, Rhode Island, I plan on taking advantage of locally grown produce. Currently, I am on the Northern Neck of Virginia which is on the Chesapeake Bay. Farm fresh produce and just off the Bay seafood is in abundance. Honestly, I have been here since Friday night and it is Monday now and I have been to the produce stand three times! So glad they take bank cards as payment. The tomatoes, corn, peaches, berries…. yum! You can not OD on fresh tomatoes and corn, can you? If yes, then I will gladly go that way. I think by the end of three weeks here they will know me by name and I will know them.

Back to the eggplant okra curry. The produce stand had a quart okra and small local eggplants. How could I pass them? They needed to come home me and have me cook something. I am trying to get back on the plant positive lifestyle again so I decided to make a veggie Indian curry. Indian cuisine like many of the regions of the world is focused on veggies and fruit. As I traveled with a trunk of my spices, Dutch ovens, and other favorite cooking things, I had everything on hand to make it. The ingredient list is simple with spices you can get at your local grocery store. If you have fresh tomatoes, you can chop them up. It would take about 5 Roma or 2 big slicing tomatoes. I used my canned since I rather eat those beauties of slicing tomatoes with a little salt and pepper.

You can make it as a meal by adding naan or rice, serve it as a side for grilled chicken, or throw it in a food processor making a warm dip. Either way, it is not over powering and I have kept it mild in spiciness for those who aren’t into the heat. If you are looking for more Indian-style or vegetarian recipes, check out here.

Now go find a local produce stand and see what you came make. Since I have leftover okra, I will be trying out Thug Kitchen’s Baked Okra and Potato Hash.