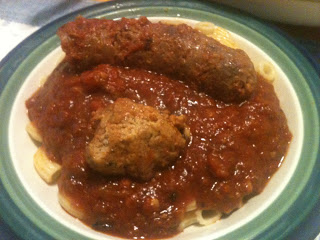 For years I’ve had this recipe for traditional Italian-American tomato gravy (or sauce). It has traveled with me through 3 moves in my well-worn recipe binder. I clipped it out of the New York Times Food section in 2002 with all the good intentions of making it. The recipe accompanied an article about traditional Italian-American food made by a cook in a New York Fire Department.

Today was the day I decided it was time to make this recipe for Sunday Gravy. There is a reason it is called Sunday Gravy; because, it can not be rushed. The meatballs are made from scratch as well as the tomato sauce then it is simmered on the stove for a good part of the day or at least it should be in my book.

Speaking of gravy… Italian-Americans friends… does anyone know why it is called gravy not sauce? Just wondering, but back to making this Sunday dinner. I cried my eyes out chopping lots of onions and garlic. I’ve never met an onion I don’t cry to… And my hands still have a hint of garlic. I love sharing my passion for cooking with my son who is almost 5-years old. It is something we both can do together. He enjoys it, too. I used “meatloaf” mix, which is beef, pork, and veal combined. Add in the seasoning, eggs, and water and we’re ready to mix. My son helps me by putting in the seasoning, but he really loves the mixing part. He molded the meatballs. He did a pretty good job forming the meatballs… Pssst… I did help him a little. Browning the sausages and meatballs in the softened onions and garlic. The house was starting to smell wonderful! Tomatoes and spices are in! Now for it to simmer. I let it simmer for over six hours allowing the flavors to blend.

And by the time it was dinner-time, the aroma was overwhelming… mouth-watering… Heaven! It was worth all of the work! Really. The recipe feeds a whole fire house so be prepared to either invite a crowd over or have a couple of dinners and lunchs out of it. And it is only going to get better with time.

After all, I can say that being a Momma now! So eat up!